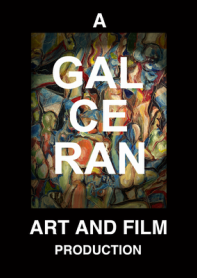 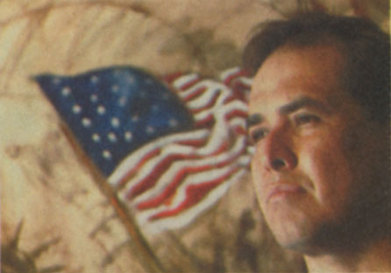 Little by little, the disturbing images suggesting racial inequality are taking shape on artist John Galceran's canvas. "I find it very perplexing that discrimination is still rampant in a country so gung-ho on freedom and equality," Galceran said.
So Galceran, 41, keeps touching up the 6-foot-by-17-foot painting in his garage that started as a tribute to the Fort Bliss 507th Maintenance Company soldiers killed in Iraq.
The painting, with its simple working title "United States of America," also honors all U.S. minorities who sacrificed their lives in the military throughout history.
Galceran has not found a wall for the painting, which may offend some people with its harsh messages, but he is determined to finish the work this fall and install it somewhere, perhaps even at the Hispanic Cultural Foundation Center in Albuquerque.
Some of Galceran's pals have suggested that people unfamiliar with the history may misinterpret the painting, which points out the nation's history of racial and ethnic discrimination. In one image, a sign once popular in West Texas declares, "No Dogs, No Mexicans Allowed."
The painting is sprinkled with other references of discrimination against the Irish, Native Americans, Japanese-Americans and African-Americans. Galceran insists the message is not anti-war, just an observation of an unpleasant aspect of U.S. history.
Galceran inquired last fall about installing the painting at El Paso International Airport. The proposal has been referred to the Arts and Culture Department, which has not yet decided whether to add the painting to the city's rotating art exhibits. "The status is up in the air right now," Galceran said.
Galceran's passion for this particular painting is fueled by memories, stories his grandmother Soledad Alvarado told of her three brothers, all Mexican immigrants who served in World War II.
"They laid their lives on the line just for a hope that it would make things better," Galceran said. "Even after they returned, they were sometimes considered second- class citizens."
Pat Abeln, the airport's director of aviation, said the Airport Advisory Board and the city manager would have to approve the painting even though the airport does not directly select the artwork exhibited.
Lilia Fierro of the Arts and Culture Department worked with Galceran when he participated in the Arts In Education program and later when he exhibited at the People's Gallery at City Hall. "His artwork is fabulous," Fierro said. "With all the bright colors and creativity mixed together, you can see how passionate he is about his art."
Richard Teschner, a neighbor and languages and linguistics professor at the University of Texas at El Paso, described Galceran as "extremely talented. He has a natural talent for his art."
Galceran comes from a family of artists originally from Barcelona, Spain. He once did artwork for Steven Spielberg's company and has produced art for animated television shows and video games. He said he left Hollywood and the prospect of earning more to try to make a difference in the arts in El Paso, where he is producing an independent film "Living Gauguin" this summer.
El Paso writer Ed Patrykus is helping raise money to help finish and install the painting.
"Sometimes, a lot of people don't want to deal with any suggestion that there was racial discrimination," Patrykus said.
Even now, with the painting almost completed, some people still ask Galceran, "why are you stirring up the past?"
"I didn't invent history," Galceran replies.
(June 11, 2005)